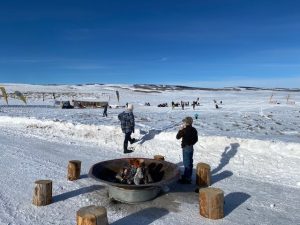 Day 3 in Kemmerer is in the books. Another exiting run under sunny skies. Those are much different conditions form last year. In 2020 it was snowing steadily throughout the stage. The further down the trail the teams ran, the deeper the snowpack became. Today heat was likely more of a factor. While the morning was still cool and crips, temperatures crept very close to the freezing point by the time teams made it back to the finishing staging area.

On day 1 in Alpine teams ran in signup order. From day 2 in Pinedale on, teams start in reverse finishing order from the previous day. The slowest team goes out first, the fastest team goes out last. No different for the third Kemmerer Stage. In day 2, Lina Streeper was the last team to leave chasing Anny Malo. Now dog teams really like to chase, and pass, other teams. So starting behind can be a big advantage, at least on hard and fast trails. Not so much on soft and punchy stuff. Anny Malo put on the afterburners yesterday in Pinedale. Especially during the last third of the run. At the 27 Mile mark, Anny had only gained 10 seconds on Lina Streeper. On in other words: Lina, although chasing Anny was not able to close the gap. More so in the last 8 Miles Anny widened the gap by more than a minute. 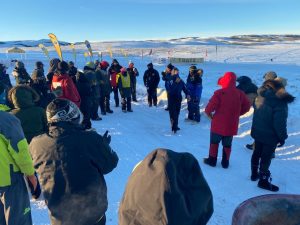 Today, here in Kemmerer the roles were reversed for those 2 Top teams. Anny Malo started last, chasing after Lina Streeper. Even if Anny is not passing Lina and. ” only ” closing some of the gap, means she is gaining more time on Lina overall, and more so, can start in last ( chasing ) position tomorrow in Big Piney again.

Wow look at this shakeup in the times today. Erick Laforce had a heck of a run. 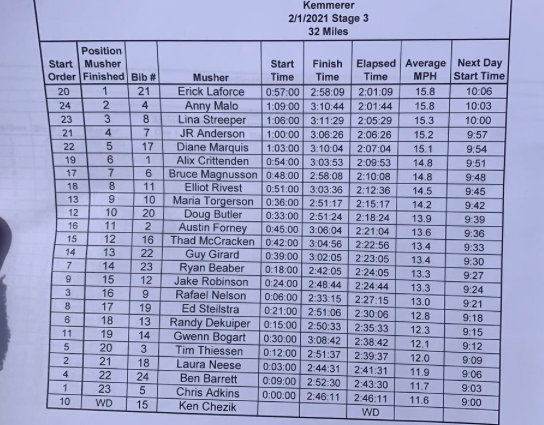 Erick Laforce having the fastest daytime and is being rewarded by the city of Kemmerer: