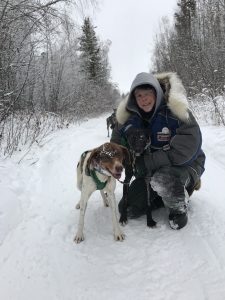 Lina has left her mark on the Pedigree® Stage Stop Race. Introduction is likely not the best word to use here…, catching up with Lina is more appropriate. She is pretty well known and has entered 4 times. Her first race being 2010 finishing 2nd that year ( 23 minutes behind her now husband Buddy Streeper ) and then being the back to back Champion in 2017 and 2018.  Last year Lina was 8th. What the heck…..

Of course that 8th place caught my attention. It is a bit unusual to not see a Streeper team in the top ranks. A little 15 mile detour during one stage was a pretty good explanation. Those detours do not help. And Lina was not alone Eric Laforce and Tommy Bird also took the long way. Coming to a split in the trail Lina took the wrong trail. There were sled tracks on both. Even asking spectators who reaffirmed that there were other teams ahead. Oh yes. Been there done that. In my case during a night run coming back from Skwentna Raodhouse during the Knik 200. Cruising down the Skwentna River, I went upstream on the Susitna, instead of downstream Same as Lina during the Stage Stop, I was not alone doing so. Turning a distance team, which is pulling a relatively heavy sled, around is one thing. Turning a high powered Stage Stop Team another. All is well, which ends well and Lina was quick to point out that she ended up winning the following stage, and thus not breaking the dogs trust. An occurrence like this shows once again: It is a dog race, and anything is possible. 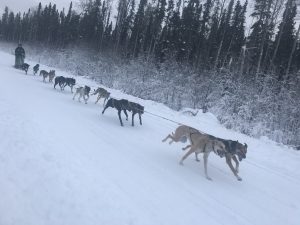 In the past the Streepers have gone down to West Yellowstone to train.  As Lina describes it, there are flat trails one way and mountains the other way and it is not far from Jackson. This year they are staying at home much longer. The race has shortened the distances considerably over the years and with the current stages being 28 to 35 miles long, that makes the running distances between the Alaska Races and Wyoming much less.

” Training in December is a breeze compared to what that used be. Last year was the first year we trained up north, and it was crazy easy, when you have done your 30 mile run…. and you are done…. instead of doing a 50 mile run “. Now that is relatively speaking and for the average mushing fan might need some more explanation: A 50 mile run, with my distance team would take me about 6 hours. The goal was to dial the dogs into a brisk trott at 8 to 9 miles an hour. A speed they could go for hours and days on end. A 6 hour run in the Streeper world, could take about half of that time. BIG DIFFERENCE. If Lina would have passed me, I likely would have felt like standing still. Her training goal is much different. 50 miles was about as far as she would ever need to go. No weight in the sled, never mind camping gear or sleeping outside. This video shows the speed Lina and Bud Streeper are training at, 17 mph. Impressive.

The day I talked to Lina they had hooked up two 18 dog teams and ran 7 miles. I did not even dare to ask her, how long that run took. Shorter runs allows them to balance a lot more things in life: ” We have hockey, we have kids, we got Christmas. That frees up so much more time “. Yes remembering my Distance training times, there was no time for any of those mentioned before. Lina said: ” we have a house project “. Wow house projects, in the middle of winter. Those I definitely never had time for while racing myself. They are currently working on their dog trailer. 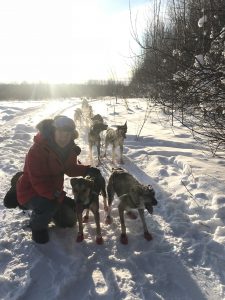 Maria Torgenson with her leaders Margo and Shelby. January 2020

Now that trailer is a sight to behold. It comfortably holds 48 dogs. For the ease of math, if the average dog is a bit more than 50lbs, that is 2500 lbs ” of dog ” alone. Plus all the gear and dog food for several weeks of travel. As many years in the past, the Streepers are staging 2 teams in the race. This year the second team is run by Maria Torgerson. She is still in school and has spent her Christmas holidays at the Streeper Kennel in Fort Nelson. Not for the first time. Over the past years she has worked as part of the Streeper team from handling for the race team to racing in the Idaho Ashland  All American Dog Derby to running a team last year in the 8 Dog Class here in Wyoming. She finished that race in 1st place. As many mushers in the past,  who had gotten their debut in the 8 Dog Class, she is now moving up to the full Pedigree® Stage Stop Race. Maria’s background is in training dog obedience and she grew up with dogs. I bet she will have a lot of fun on this trip!

About half of the dogs on the truck will be seasoned race dogs and the other half are 2 year olds. It is not surprising to hear that there are lots of 3 year olds and a few 4 year olds on the truck. The maximum age will be 6. From the sounds of it 9 year old Odessa ( 5 times Stage Stop Champion dog ) is not joining the ranks this year and she is having fun training pups in Fort Nelson. 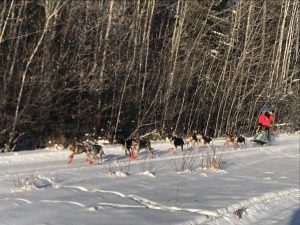 Often in Sprint Racing Mushers favor smaller female dogs. Yet with the trail being anything but flat and fast, the Streepers favor a ratio of 60% bigger males to 40% females for the Wyoming Stage Stop Race. ” There are some big hills on that Continental Divide “. With 150 dogs total in the kennel and 48 dogs on the truck both teams are bound to have great depth to them. From the sounds of it, training has already peaked and is now moving towards running shorter distances. After Wyoming Lina plans to travel to a sprint race in Whitehorse Yukon, before continuing all the way up to Alaska, ONAC and Rondy bound. Safe travels, see you in Jackson in a few weeks.