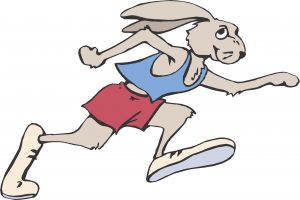 A snow machine, four-wheeler, another dog team, or anything a dog can chase has been proven an effective training tool for many kennels.  The chase method is fairly common among mushers who have the resources to do so.  Some start young dogs by chasing a four-wheeler so they get used to the chase being fun.

For some it is simply not practical to train this way.  Terrain, wildlife, and traffic can play key roles determining a team’s training methods.  Those who use the chase find it’s much easier on the head of most dogs to follow instead of lead.  It makes it easier for the development of young leaders if they just have to follow.

It can also be said it’s used for safety to ward off wildlife or warn others on the trail that there is a dog team coming. It can take a lot of the stressors of running dogs from the musher.  It adds in support if there is not enough snow to safely hook down or make turn-arounds as the dogs will follow if trained this way.

If you train all alone it creates a much different set of circumstances.  No safety net, nothing to chase, just you and the dogs. Both ways are totally acceptable based on personal preference, each having its own merit.

Does this effect how some teams race? Yes, it can and does. Is it fair or legal?  It is just a fair chase training technique.  The question of drafting in a race has been a stumbling block for more than one conversation, so I’ll stick my neck out here and stumble right along trying to explain.

Advantages: If two or more teams from the same kennel compete in the same race those dogs are used to chasing the other team, either by knowing the other dogs or by being creatures of habit.  Let’s say team 1 passes team 2 and then team 3. Then as long as team 1 allows them to catch the pace, they most likely will lock on and give chase following the lead team.  Let’s say team 4 was beating team 3 easily, until team 3 locked on and poof!…  They are gone!

It can be frustrating but if you’re not careful you can give too much chase and not have enough left in the tank to be competitive in the days ahead.

Disadvantages: If you’re on the trail alone you may not have true leaders who will get out there and set a good pace, or in certain situations where it was tough going either soft trails, deep snow, or extreme temperatures in either direction.

In these situations a single trail-hardened team and leaders need no encouragement to get on down the trail whether they have company or not. In fact in a busy race if you trained alone too much other teams may slow your progress when you pass them by not wanting to leave the team they easily caught.

Either way this is one of the reasons why no pacing is allowed and no kennel in the race can have their snowmachines on the trail during the race.