next up to the starting line is Gwenn Wisell Perkins Bogart. The first time I met Gwen was in 2011 after I had just finished my last Iditarod in Nome and we were staying at long time Iditarod Supporters Chris and Jim Rowe of Bering Air. At the time Gwenn had a dream: To run Iditarod. At the time I told her be careful, it is pretty addictive. 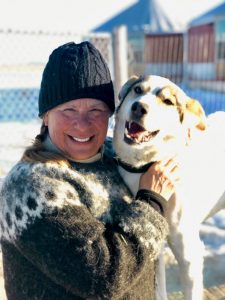 Sure enough, here we are, a decade later I have hung up the harnesses and Gwenn is ready to run her First Pedigree Stage Stop Race at 63 years of age.  And, oh yes, she did follow her dream with running the 2015 Iditarod. That was a cold one. She ran Jason Mackey dogs at the time and qualified with running the Sheep Mountain 150, 2 Copper Basin 3oo’s and the Northern Lights 300. Although this is Gwenn’s first time at the starting line in Jackson, she is by no means a stranger to racing.

She moved to Wyoming with Dave, her husband, and 6 dogs. Doing things a bit uncommon is right up their alley. Instead of moving into a real house, they build yurtville in the small town of Bolder ( about 180 people ), 12 miles south of Pinedale, the 2nd Stage of the Stage Stop. That is where I met Gwen last year again. She was thinking out loud, that she would like to run the race herself. Same as with following through with her Iditarod dream, here she is: In the 2021 Pedigree Stage Stop Race lineup. 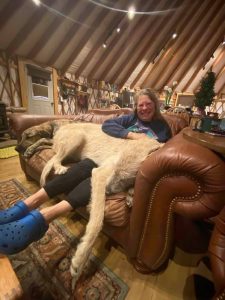 The 6 dogs, grew to a full size team of 24 dogs in total, plus a few spoiled rotten pets. Oversized lap dogs so to speak. Training in earnest began with a team of 18. Right now she has that group narrowed down to the final 14. The team is a family affair. She bought 2 females named June and Katness from Wade Marrs a couple of years ago. They were bred to sires from Bob Clupatch. The result were two large litters which are now 3 year olds and comprise the main team. Her main leader is Gus, who happened to have have the same birthday as Wade. Neeless to say 2 of the dogs names are Wade and Sophie. The whole team is about half males, half females. A bit uncommon is: All but 1 male are spayed and neutered. That should keep ” female in heat mayhem” at bay. As strangely females often like to come into heat right during the main race a musher happens to plan.

Training has been going well for Gwenn. Of course not without challenges. With her experience being mostly longer mid distance races, training for Wyoming is a whole different ballgame. Buying 3 dogs from Nicole Lombardi and Doug Swingley she found great mentors at the same time: ” Dave, Nicole, Doug and I all connected. We hit if off, like old friends. Nicole and I almost text daily about what to do with the dogs “. Well I’d say Gwenn is bound to get some pretty solid advice from Nicole and Doug. 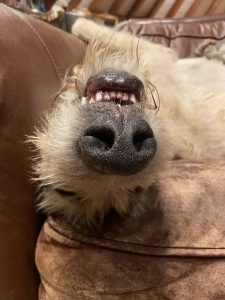 The seed to run the Pedigree Stage Stop Race was planted during the last time in which Gwenn raced the Eagle Cap Extreme Race in Oregon. She was not quite enjoying herself as much as she used to. The arduous training for the longer distances became less appealing with progressing musher age. Heck I can relate to that.  Yet there remains the fun of being around the dogs and of course the camaraderie with the other mushers, race crew, vet and the friendships formed along the trail. So training changed considerably with shorter distances. 32 Miles at 15 mph+ go by pretty fast.

Gwenn is fortunate for being able to run right out of the yard. Snow conditions have been not the most cooperative this year, with snow being a bit on the skinny side. While her 2015 Iditarod saw temperatures plummet to 50 below in Tanana, dealing with warm temperatures, yet keeping training up, has been a different challenge this year. It was very warm weather all through October. By Christmas Gwenn was putting on 40 milers, just to be told by her mentors Nicole and Doug: ” Too long, no need to do 40th,  33 miles is all you need “.

By now, less than 2 weeks before race day, miles are being tapered off even further with 25 mile runs, soon to go down to 15 mile runs; with planning to ” open up ” the dogs to running at 19 miles an hour. That is double the typical Iditarod speed. Hang on for the ride. 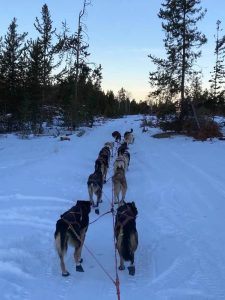 So far her whole team has stayed injury free. One thing which Doug seemed to have relayed well: Off days are equally important to running days. 2 on 1 off, or 2 on 2 off, are pretty typical training schedules. To play things safe Gwenn has her husband Dave and another helper come along on snowmachines in case she runs into issues along the trail. With the skinny snow conditions, she mostly stops with snubbing down to the iron dog.

Feeding is always a topic. While her main food is a 32/20 named ” Tug ” out of MN, she is also feeding Purina Performance a 30/20. Supplemented with a meat, be it course ground beef, fine ground salmon or whole liver. Feeding a high performance dog team in an art, and each musher works out a system of what works best for them, also based on availability in their area.

As for Gwenn’s goals: ” I want to finish and have fun with my dogs. I want to do well by my dogs “. Welcome to the Stage Stop Family Gwenn! She likes to wish everybody happy dogs and safe trails and can’t wait to meet everybody.

Talking about meeting everybody. I made the sad decision to not travel to Wyoming myself and do true Armchair Mushing instead. We have next to no active covid cases in the Yukon. Flights are far and few in-between these days. It feels a bit like living on Yukon Island. Covid testing is only possible up here, if you display symptoms, but not for travel ( as with the new 72 hr requirement for a negative test to enter the US ). That means little choice for me but to stay home. Real bummer, as I had much looked forward to going back to Wyoming. Expert long time Commentator Jerry Bath will keep you posted with having his boots on the ground, while I chime in from afar, learning to do things remotely. Happy trails.