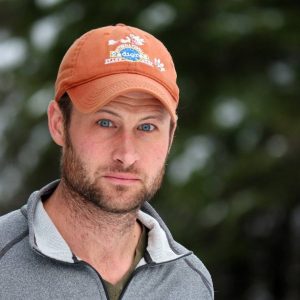 JR Anderson is no stranger to the Pedigree® Stage Stop Race. This will be his 15th time! Addicted? Likely! 2005 JR raced for the 1st time in Wyoming, took 2009 off and has been back ever since. That puts him on par for number of starts with Bruce Magnusson. JR’s best finish has been 3rd. So has been Bruce. Last year JR and Bruce were 9th and 10th. A few years ago they both went to run a 150 miler, finishing seconds apart once again.

Are you starting to see the theme here? We definitely have a bit or a race within the race going on here. And that seems to be a friendly one. JR lives in Minnesota. Not known for mountains. So it was not surprising to hear that he is leaving home early to train in higher altitude in Laramie WY. He is aiming to leave at somewhere around the 20th of the month. There he is meeting up with his buddy Bruce Magnusson. Better to keep an eye on the competition, eh?

The drive is not around the corner for JR. Last year he upgraded his outfit to include a gooseneck trailer. Those can carry a heavy load and afford him and his crew to stay in it along the way. That cuts down on hotel cost. Plus its closer to the dogs. He plans to be on the road for up to 40 days. As he put it: ” Every once in a while we stay in a hotel to stock up on water and have a shower.” a shower??? ” Yes for the ladies. ” He will be accompanied by Kendra who is an equine physical therapist as we as Chris, who help JR train at home. Him and Chris also work together in construction, which means they should get along. Life between musher and handler can get pretty interesting on long road trips, so enjoying each others company is nice. 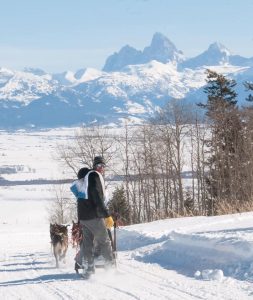 ” Coming up with a team is one thing, racing a dog team is another! ” JR said. Very well put. And coming up with a team which can race 8 days in row ( with one rest-travel day ) is even harder. Yes, this is not the Iditarod, but even there is a 24 hr layover. There are no more campouts. But running at speeds of 16 to 18 miles an hour is not for the faint of heart. And it takes a very special dog, to do that many days in row. Good recuperation time is key. At those speeds there is no room for error. Any dog not up for the task, will end up in the basket. And that should be avoided, considering the mountainous terrain. 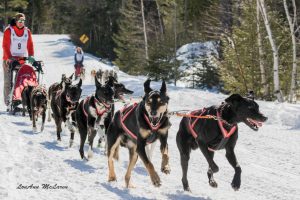 JR has handled for the only 5 time Champion of Iditarod, none other than Rick Swenson. He used to train out of his goldmine in Eureka Alaska. That is remote country. Really off grid. Off everything. That was complete happiness for JR. ” I would not see Swenson for days, then he would bring by some food and I did not even have to talk to him”. Naturally JR enjoyed the campouts while the Pedigree® Stage Stop Race still had those. That does not mean he isn’t enjoying the new format. ” It has attracted more mushers and there is time for other things in life”. I have heard that from some of the other mushers too. Trying to find balance between training for racing and ” normal ” life is for sure a challenge. Shorter distances definitely help in that department. Yet having speedier dogs is a whole different ballgame. Most dogs can trott at 8 mph. Few can run 18mph and still do so efficently. It is a sight to behold, seeing a fully stretched out team, specially in slow motion, each front right leg hitting the ground at the same time. 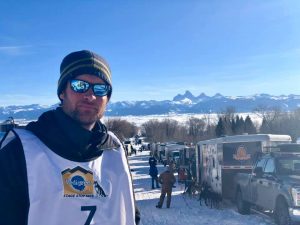 His main training revolves around 1 day on , 1 day off. There is some race simulation time too, meaning consecutive runs. Key to training is good snow, but….. somebody is using his trail for a different purpose. When snow first arrived JR put in a beautiful groomed trail, just to have it plowed away. Moving to a different area, the same thing happened once again. Not giving up ( Mushers do not give up ) he put in a trail in a third location, same result. 3 for 3.  He lives in northern Minnesota and that is logging country after all. 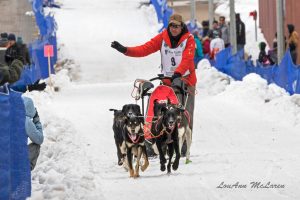 His kennel has 34 dogs. Training started with 24 and is now focusing on the final 16. JR is driving a younger team, and likely has 6 of 16 dogs being 2 year olds. Only 4 of the dogs will be females. Females can be fun on the truck when it comes to heat cycles, as if they were to say: ” It is racing season, let’s all come into heat “. Oh yes I remember those times, that is why I eventually spayed most of them, less chaos.

The main fuel source for JR’s team is Redpaw. That has been another interesting aspect of talking to the different mushers, to hear what they are feeding. Of course he is supplementing a lot with meat, ground beef being the meat of choice. Availability is one thing. Being consistently good meat another. To make sure that is the case, JR has to travel a whopping 600 miles for his preferred supplier. Oh the crazy stuff mushers do. It sounds like JR is all in! Musher by night, contractor by day. His better half Anne is running a marketing agency. Yet JR is mainly focused on the dogs, because that is what he likes to do. His long runs, about 32 miles, take anywhere form 2.5 hrs to 3 hrs, depending on snow conditions. Short runs are 7 to 10 Miles and done at 18mph. Dang…. that gotta be fun! Safe travels JR, looking forward to seeing you in Jackson.

Here a short video of JR training his team