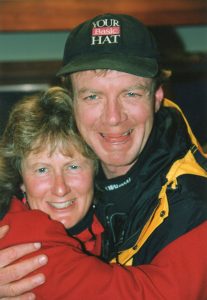 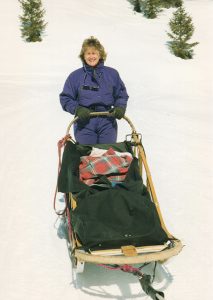 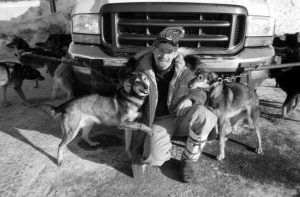 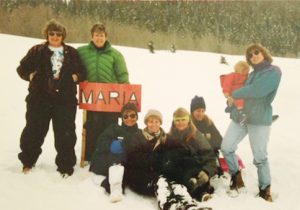 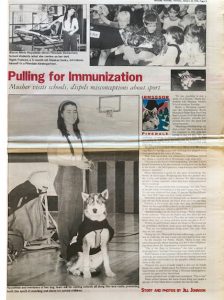 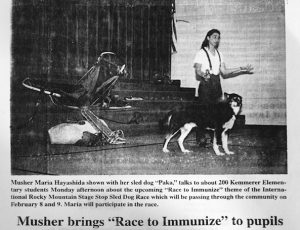 A race to the starting line.

A lot of things can happen with an introduction, a conversation, and a handshake. That’s how the Pedigree Stage Stop Race began back in 1995.

I loved dogs, and was mesmerized with the sport of mushing. I was also the Teton County Public Health Director tasked with getting our county (and state) immunization rates for two-year-olds to 90% by the year 2000. Stay with me, and I’ll tell you how I connected these two.

Let’s face it, convincing parents to get their kiddos vaccinated has never been easy, and persuading the Wyoming Department of Health to look at different ways to educate and vaccinate seemed as challenging as getting a cow to jump over the moon.

My strength was community mobilization, health education, and fundraising but I’d only seen pictures of sled dogs and racers. Frank Teasley, whom I’d never met, was a musher and owner of the JH Iditarod kennels in Jackson. Bottom line: I had health contacts, and Frank had sled dog racing savvy and had grown a successful business.  We seemed a perfect match for an unusual path to increase immunization rates in Wyoming.

So, in February 1995, I wandered over to the American Dog Derby race in Ashton, Idaho where Frank stood at the finish line.

“Hi, my name is Jayne Ottman. I want to advance statewide immunization rates per federal mandates, and I want to do this with a sled dog race, like the Iditarod. I know zero about racing.  But I am determined to meet these goals, and have fun along the way.”

He looked at me puzzled, then broke into a grin, “I know how to run a race. I’d like to create a stage race that is more accessible than the Iditarod to all mushers. Can you meet me at my kennel on Monday and we’ll talk more about this?”

Over coffee we designed an outline for the race and its mission. An hour later, the dream for a stage race was set. Well that was the easy part.

We had less than a year to complete this herculean task. Frank and I have constitutions that don’t break, and we knew that if we kept our eyes on the prize, we’d ultimately grab it. And we did.

For the next nine months our lives were 24/7 logistics and fundraising. We didn’t have a penny, and no sponsors, either. The state immunization folks initially couldn’t see the link between immunizations and sled dogs. But Ken Kamis, then Director of the WY Department of Health and the late Jackie Cushing, my nursing supervisor at the time, saw an opportunity. In fact, the state ultimately got behind the idea, and contributed our first donation.

First, we really needed a name that would include all of Wyoming. We started out with The International Stage Stop Sled Dog Race, a mouthful for sure. Very quickly, the abbreviated title became  “The Race To Immunize” and Jackie coined a tag line, “Wyoming Pulling Together”.

Eventually, the Wyoming Division of Tourism and the state PR person came on board to help spread the word. Local communities pitched in to house and feed mushers, bought banners, and helped with the logistics of staging in their towns.  Snowmobile clubs groomed trails and provided checkpoints along the way. Public health nurses showed up at start lines, finish lines, and banquets to educate families about the need for immunizations.

Maria Hyashida, local musher, became the education spokesperson for schools located along the race route. Before the race she brought her sled dogs to the kids, and talked to them about the importance of immunizations.  Mushers from this race continued this work visiting schools, a hands on education with a feel-good message.

Were we successful? Immunization rates improved considerably throughout the state, especially those counties along the race route. Within two years Teton County’s rates surpassed the 2000 goal and Wyoming became a leader in the nation. Communities were grateful for a winter activity that brought excitement, revenue, a new sport, and a hands-on message about health.

Our success would not have happened without Teton County Public Health staff who were critical players. Therefore I wish to thank personally: Sherry Gralund, Cheryl Adams, Rae Doty, Bonnie Pocket, Janet Garland, Tammi Walsh and Cathy Newton. They were a committed team who trusted each other while pioneering new and challenging trails of health education. They worked endlessly for the greater good of all Wyoming without complaint. They were the real deal, the A-team!

Jayne and Maria co-founded a Youth Philanthropy Program for kids along the race route to submit an essay and complete 20 hours of community service. The winners got to run the last 5K leg of the race with a musher and drive a team! This program exists today.

In 1996, Jayne was invited to present the successful Race To Immunize at a CDC national immunization conference in Washington DC. She talked about unusual ways to knit communities together and promote critical health message, all while having fun.

I’m most proud of this race and the efforts of Wyoming people. It was and continues to be a grass-roots effort that brings satisfaction and smiles to the folks who live and work here. I’m most thankful that Pedigree stepped on the runners to lead the way. Their efforts and commitment continue to make this the number one winter showcase event in Wyoming each year.