AND WE HAVE A CHAMPION for the 25th edition of the Pedigree Stage Stop Race. ANNY MALO from Quebec. She has run the race twice and won 2 for 2. 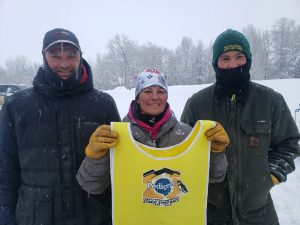 More so, she has also won 6 of 7 Stages this year. That shows very clearly the depth her team has. Especially considering that the 2nd Place Finisher, Lina Streeper, is also a 2 time Champion. More so, the Streepers have won this race more than any other kennel.

Anny seemed to have clean runs in every stage. During the second Stage in Pinedale, where Jeff Conn, Bruce Magnusson and Lina Streeper got off trail, she stopped long enough to help Lina lead her team back to the main trail. That shows the level of Sportsmanship between these top teams. 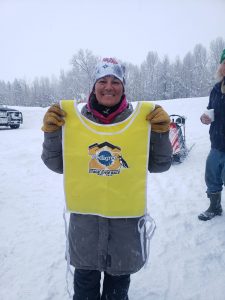 There are many other success stories for this race. Alix Crittenden put in a super solid 3rd place performance. She is also a ” repeat offender ” with being 3rd last year. It shows that Alix has it what it takes to compete right at the top. That must make race founder Frank Teasley very proud, as Alix is running dogs out of his Jackson Hole Iditarod Kennel.

Rachel Courtney finished 4th. She had incredible steady run times during each stage. And that despite being faced with very difficult travel circumstances, with her truck breaking down en route to Lander. He team has been catching a ride with Chris Atkins and Shannon Miller. 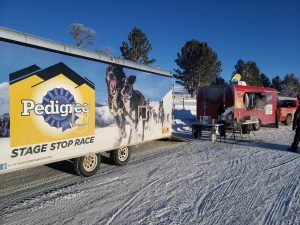 The 5th team is Maria Torgerson, who is running a leased team out of the Streeper Kennel. She did have a couple of not so clean runs at the beginning, with having trouble at the turn around spots. Todays 3rd place daytime finish, shows what that team is capable of. Streepers have a great depth in their kennel. Watching the whole crew loose drop 48 dogs this morning before race start at lower slide lake is pretty inspiring. Lot’s of work goes into having that many well mannered dogs.

Austin Forney, Bruce Magnusson and JR Anderson have been running a very close race all along. They have been jockeying for positions since day 1 in Alpine. JR and Bruce have both run the race 15 times. They have both finished very close to each other a few times before. Best of friends do not loose sight of each other!

Elliot Rivest running the second team out of the Rivest Kennel edged out Rafael Nelson( Running dogs for Jerry Scdoris from Oregon ) for 9th place on todays stage. It was a lot of fun watching both of these athletic mushers sprinting up the hills behind their teams. Rafael had not driven his team much prior to coming here! Great showing with 10th place. 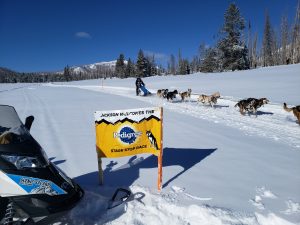 Tim Thiessen and Fernando Ramirez finished 11th and 12th respectively. They both seemed to have a lot of fun out on the trail.

Doug Butler who traveled all the way from Vermont came in 12th. Talk about having fun. He had such a big grin on this face each day, it was infectious. And fun did he have when he got a hold of the microphone at the banquets or race starts. We might be in for a treat at tonights finishing banquet here in Jackson.

Chris Adkins ran a steady Eddy race throughout with a very well mannered team. He was followed by Ben Barrett who ran Doug Butlers 2nd team. For him running the race was a chance of a lifetime. After a couple of tough days during the middle stages, his team bounces back nicely.

Linda Pierce and Allan Berge brought up the rear. Both are more traveling distance mushing speed and Linda even stopping on the trail to snack her dogs! Dog care is spelled in capital letters for both of these nice looking teams. 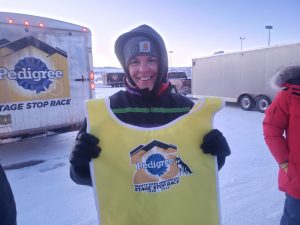 The only team withdrawing from the race was Jeff Conn from Alaska, who decided to not start the Driggs Stage, due to sick dogs. It takes a wise musher, to know when to say no…. despite running in 5th position at the time!

This concludes my commentary for the 2020, 25th edition of the Pedigree Stage Stop Race. I sure had fun being here. It was a pleasure to meet to many great dog people and to see such beautiful country! I had heard about the Stage Stop Family and the race truley has a tight knit family atmosphere.  Mush on! 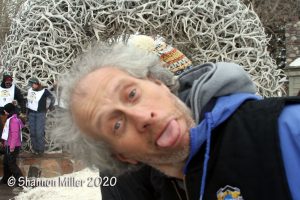