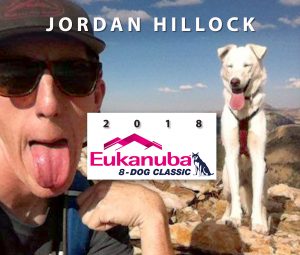 Jordan Hillock from Park City Utah is not only in his rookie run of the Eukanuba Classic but also his rookie year of owning his own dog team. Jordan plans on coming to Jackson a day early to get in a few runs on his snowboard.

Central Utah has had its share of unseasonably warm weather with little snow. Making his training plans less than ideal. Acquiring dogs, equipment and setting up his dog yard all took longer than expected. So most of his training was straight out of the yard. Things you don’t think of come into play. It can be overwhelming, and you start to get the mentality of “make it through this year and next off season work on the dog yard.” His advice to new owners is to start way before you think you should.

Acclimation was not a problem as his trails are 5,800 to 7,200 ft. Due to the warm weather he didn’t get stated training until October but is doing 30 mi runs before the race. The Eukanuba 8 dog Classic will be his first race of the season with another race planned two weeks later.

Jordan is hoping to be competitive and come home from the race better prepared for the next one. This was the race Jordan was shooting for to race and can’t wait to be involved as a race team and bring some central Utah pride to the Mushing
community.