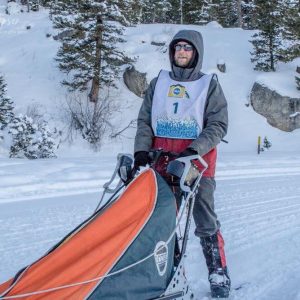 Hello Race Fans, Austin Forney is back for another shot at the Pedigree® Stage Stop Race. He first ran the 8 Dog Class in 2015 and then moved up to the full stage in 2016. To date his best finish was 9th place in 2018. And from the sounds of it, he likes to improve on that finish. To accomplish that, Austin has done a few changes to his training regimen. Last year was the first year of the shorter format ( which will be the same this year ) and with that came a greater need for speed. He also pointed out: ” The race is won and lost in the hills “. His aim is to keep his team loping. ” more loping, less trotting and maintaining speed uphill”. Austin compared it to running a truck and trailer in the mountains, with trying to keep the momentum uphill and not coming into a situation of downshifting. 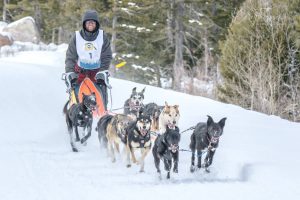 The Pedigree® Stage Stop Race is Austin’s only race for the season. His favorite Stage is Alpine, the rolling hills along the river, plenty of wildlife with moose and elk. One year he saw an Eagle soar above the trail.  Austin loves everything about Stage Stop:  From the people, the landscape, the competition to the Stage Stop Family: ” Let’s go mushing and run dogs with friends for 2 weeks “. Heck, who would not want to do that? 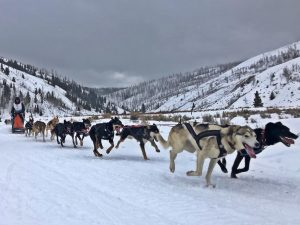 Austin Forney hails from Leadville Colorado, same place as fellow competitor Tim Thiessen. Leadville is sitting above 10.000 Feet and seems to be an ideal place to train dogs. Altitude training comes as a side perk and the weather this past summer was cooperative enough to start fall training on August 15th with 5 mile runs. The typical training schedule is 1 day on, one day off, running 2 teams of 12. That leaves to extra dogs for rotation in and out, to give some dogs extra rest when needed. 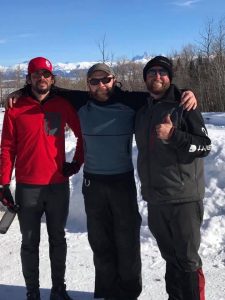 Leadville gets good snow early, usually by the end of October . Being on a sled by Thanksgiving is the norm. Managing a tour kennel for 100 dogs gives Austin a pretty good pool of dogs to pick from. 26 dogs started race training in earnest and 16 get to travel to Wyoming. It is ” only ” 650 miles to Jackson and the plan is to hit the road about on the 27th, to get a few more runs in near Jackson and to also give a presentation for the Swan Valley School in Idaho.

The dogs on the truck are between 2 and 5 years old. 8 of them are Stage Stop Veterans. All of them are Alaskan Huskies with about 50% female to 50% male ratio. Nutrition is always a major factor. To get that right, for different conditions, is a piece of art. Besides feeding Diamond Performance, his dogs eat a diet of ground beef with adding Genesis and Revive as supplements from Tensquared Racing. 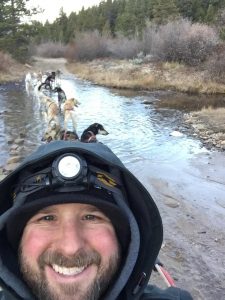 Austin’s mushing career started in 2006 as a tour guide in Michigan, at a small resort with about 20 dogs. From Michigan a job opportunity took him to Arleigh Jorgenson in Minnesota. After a stint of ranching Austin met Jerry Bath who became his mentor and sold him some dogs. It never hurts to start racing with good dogs. The Forney family decided to move to Leadville, their current location. Austin specifically would like to thank Jerry Bath: ” I would not be where I am at, without Jerry”. Save travels, see you in a bit more than a week!

Here a fun video, Austin took a little while ago on one of his training runs: