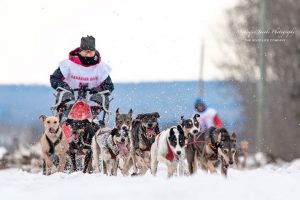 Hello Pedigree® Stage Stop Race Fans. In these days, where races have existed for a long time, there is usually a steep competition for being the coveted ” Rookie of the Year “. It is very rare that the Rookie of the Year is also the Champion of a race. Exactly that happened in 2019 during the 24th edition of the Pedigree® Stage Stop Race. Anny Malo from Quebec came out on the Top. Her husband Marco had run the race back in 2012, but for Anny it was her first time at the starting line. 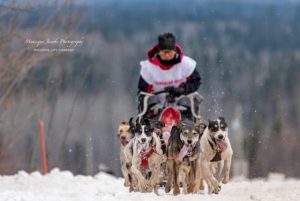 At the time, in 2012 stages were still a bit longer with 50 and 60 miles. Now the stages have been shortened to 28-35 miles. That played a role in them coming back: ” In 2012 it was hard to get the speed back for our shorter races”. This year the Stage Stop is Anny´s 1st race of the season and then, like many other teams, ” The Pas ” in Manitoba is next on the racing schedule.

Like all other teams, it has taken a lot of hard work, to train up a team which is ready to run the Stage Stop Race. In the late summer of 2019 training began with 4 mile runs, which then were gradually increased 4,6,8….till arriving at 30 milers in December. Training is every other day. 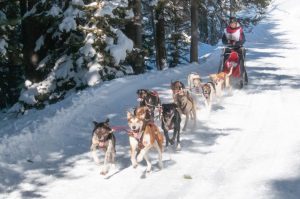 The snow situation in Quebec has not been ideal with it having been a warm winter with lots of rain. That makes it hard to keep a trail in. Yet Anny managed to be on the sled by November 16th. She is not running the race alone. Her youngest son Elliot Rivest ( 15 )  is also running a team. Matter of fact it is a whole family affair with Marco being the handler this year. All 3 of them train teams. Anny between 10 and 12 dogs per team, whereas Elliot and Marco prefer to take bigger teams out, up to 16 dogs. Their oldest son stays behind in Quebec to take care of the remaining kennel. 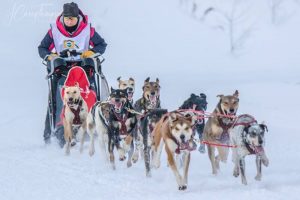 Most of Anny´s dogs ran the Stage Stop last year, there will be 4 or 5 new dogs on the team. Last year they were a young team, with many two year olds. The oldest dogs on the team will be 4. All of them are Alaskan Huskies. From the sounds of it they used to run a bit more hounds, but have since moved back towards Alaskan Huskies, with more hair. Their whole kennel comprises of 90 dogs. That is a pretty large number and Anny was quick to point out, with having had 38 pups last summer. Usually they keep around 60 dogs. 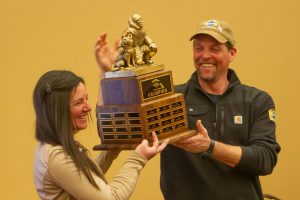 When talking to Anny, the family had just arrived in Laramie WY after a long three and half day treck from Quebec. They have a total of 35 dogs on the truck and trailer. That trailer has a living quarter in it. The plan was to arrive early to get dogs and humans accustomed to the much higher altitude than at home. Elliot is having double duty. While being on the road for 4 to 5 weeks he misses some school. That means school work needs to be done, besides caring and training his team. Pretty tough schedule for a 15 year old. Anny, Elliot and Marco are having a great time to travel to races as a family!

With Anny Malo being the 2019 Pedigree® Stage Stop Race Champion it was pretty pointless to ask her what she was hoping to change from last year.