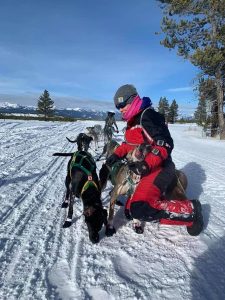 The Streeper Kennel from Fort Nelson, Canada, has been a regular at the Pedigree Stage Stop race for 2 decades. Buddy Streeper used to be at the helm of the A team. When talking to him why he had handed over the reigns to his wife Lina? He was quick to point out, that in todays shorter distances and smaller team sizes musher weight matters. That seems to be the case when looking at the past years race results. The last time Bud Streeper won the race was back in 2016. Ever since either Lina Streeper or Anny Malo finished first, both 2 times. Arguably those 2 are the teams to beat in 2021.

Both have done the treck down south several weeks ago, to get their dogs used to the higher altitudes and to get some good solid snow runs in West Yellowstone. Likely the temperatures are more moderate too. As I type this it is minus 11F in Fort Nelson and plus 21F in West Yellowstone. 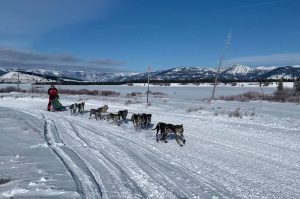 Last year Anny dominated the Stage Stop from day one. The only stage Lina Streeper came out on top was in Big Piney. We handed over the Yellow Bib in downtown Lander for next days stage. In general both teams are fairly evenly matched. The big difference in the outcome in any given stage is, if the musher has a clean run: Be it clean passes, be it not loading a dog, or be it staying on the main trail. Those few seconds, sometimes minutes then easily decide the overall outcome. 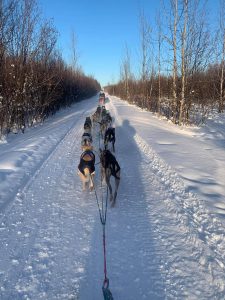 This year the Pedigree Stage Stop Race is Lina Streeper’s main event. It also is the kickoff of the season at the same time. And who knows, it might be the only race of the season, depending on the fate of many other regular races. In a usual season the Streepers are headed to Alaska after Wyoming. This year the Fur Rondy is already cancelled. As of now the 75th !!! Open North American Championship March 19th to 21st is still on the race calendar.

Back at home Terry Streeper is looking after the kennel. He sure has been posting some fun ” blasts from the past ” during the last days on Facebook.  Lina’s mom came over from Sweden to take care of their children, so Bud and Lina are on the road without family. They started with 39 dogs. To them, that is not a big number. Watching their whole team loose drop is an impressive sight.

Same as in 2020 Maria Torgerson is running a second Streeper team. The word ” B team. ” would be very much misplaced with that caliber of team. Maria finished an impressive 5th place last year. This winter she has gotten more sled time in, with running tours for for some time. The main reason to have more dogs on the truck, as needed for 2 teams, is to teach younger dogs ” life on the road “.

Training conditions have been good in Fort Nelson: ” We got on the sled on November 1st “. Training runs have been in the 30 mile range. One thing the Lina pointed out: ” This year not every training run was from home. ”  They drove to an old logging road, about 30 minutes away, for the dogs to see something else. As Bud put it: ” Every time we have trained on this logging road, we have won “. Time will tell if that holds true for 2021 and who has the cleanest runs.

When I asked them about any changes from last year? ” We start fresh again. No real changes. We did a couple of more longer runs. We went down to West Yellowstone a little earlier than last year, more about the time like we used to come down. Other than that, no changes”. Indeed, why change a winning formula!

We hope to do a recorded Zoom Meeting with Lina and Anny pre race tonight.  Stay tuned. It might take a little bit to work out the bugs of ” modern technology “. 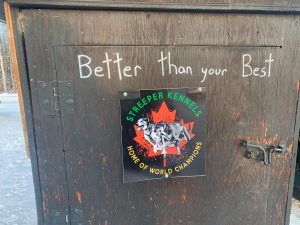 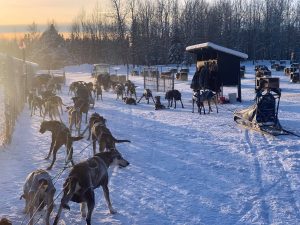