Time flies. It has been a few years since I had last talked to Bruce Magnusson in person. That was back in 2009 where we both gave a talk at a sled dog symposium in Michigan. 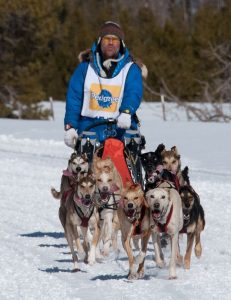 Last year Bruce finished in 9th position at the Pedigree® Stage Stop Race. He has been 3 times in 3rd position over his career. And quite a career that is. He has run it 15 times consecutively and has tied JR Anderson who has also participated 15 times, although not consecutively. Bruce has 54 dogs, of which he is training 26 for the Stage Stop Race. In his spare time, which I am sure “is plenty”, he runs another team of 10 with 8 yearlings.

When I talked to Fernando Ramirez, he mentioned that Bruce had helped him with dogs. From the sounds of it 9 or 10 of Fernando’s team mates might have their origin from the Magnusson kennel: ” I am very happy that these dogs have gone to Fernando and Dana, as their are extremely caring people “. 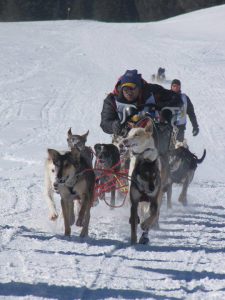 Training is definitely geared towards running fast for Bruce. He is already finished with his longest runs, which were 32 miles, which he did twice. It is pretty interesting how different training conditions have been for different mushers. “Michigan has had the best conditions I have seen”, Bruce said. What he is talking about is 112 Inches of snow. That is a whopper and not surprising to hear the he has been on the sled since November 6th, the earliest in his career. Training is every other day. Sometimes he runs twice a day, followed by 2 days off. In total the team sits at about 580 miles and should near 750 miles before the start of the Pedigree® Stage Stop Race. That is considerably less than in the past, where they were closer to 900 to 1100 Miles. Run Distances have been shortened over the years, with the longest distances no longer being 50 or even 70 miles.

Asking about the age group of his dogs: 10 are 3, 1 is 4, 2 are 5 and 1 six year old. Leaders are Andy (3), George (4) and Primrose (5). The split between females and males is 50:50. “I prefer bigger males for Wyoming. But I run my best dogs no matter what and some of the females seem to mature faster”. The dogs source of energy comes from Caribou Creek dryfood and a meat mix he developed with none other than Veterinarian Mike Davis from Oklahoma State University. Mike has been studying sled dogs and nutrition for a long time. I had the pleasure of working with him on Iditarod a few times. 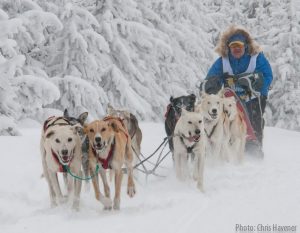 Asked about his goal: “I want to win the Stage Stop”. That is pretty clear cut. Bruce loves the stage format. It is like a big reunion every year. It takes a very special dog to run 8 days in a row ( with 1 rest day ) at top speeds of 17 miles an hour. ” I learned more in 1 Stage Stop Race than in 10 years.” Yes managing a dogteam and keeping them healthy over many days of racing takes a lot of knowledge. Bruce joked: One year Doug Swingly told me: ” You get very good at carrying dogs, maybe you should not bring them”. ( I had a similar “pep talk ” by John Baker in Iditarod in the Rohn Checkpoint one year, which stuck with me through my racing career ).  A the common theme I hear amongst mushers is how open and welcoming everybody at the Pedigree® Stage Stop Race is. 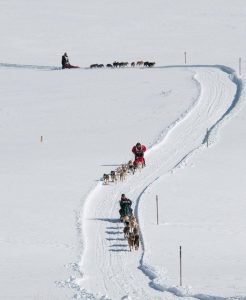 Bruce is soon to leave his Michigan home to go racing near Winnipeg Manitoba on the 17th,18th of January and then heading to West Yellowstone to continue his training. His racing season is far from over after the Pedigree® Stage Stop Race. As quite a few of the other Stage Stop Mushers he will head to The Pas 2 day Sprint Race. After likely to the Fur Rondy and ONAC in Alaska before finishing off the season with hopefully running the Copper Dog for the 1st time. Safe travels! Looking forward to seeing you in Jackson.

When I asked Bruce for pictures or video:” I run dogs, I do not take pictures”. Love it, true focus on the essential.