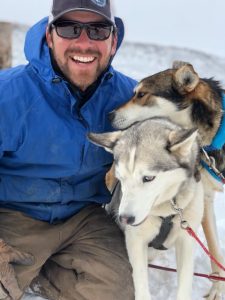 Fernando Ramirez grew up in Park City, Utah where he began racing sled dogs at a very young age. He currently co-owns a Dog Sled touring operation in the Park City area at Rancho Luna Lobos with his wife Dana.

This is will be Fernando’s first year at Eukanuba Stage Stop and he is very excited. Rancho Luna Lobos starts their pre-race training season when the weather cools down enough for some quality runs. This year was a challenge as far as snow was concerned. The race team had to drive up to higher locations for training, mostly at night for cooler temperatures and after full days of touring.

“Fernando is just excited to see how the kids do at a race of this caliber. He is really hoping for the best. In a race we can have a plan Fernando says. They run a family operation with his wife Dana Ramirez and their sons, Gabriel, age 7, and Noah, 5.