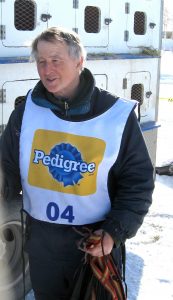 Jeff at the end of his first Stage Stop Race

This is the beginning of a series where I try to catch up with as many of the Stage Stop Mushers before the race, as possible. While introducing them, it also gives me a chance to learn a bit more about the race. The first Musher I talked to was Jeff Conn from Ester Alaska.

Jeff is no stranger to Wyoming. He has run it 7 times. Finishing last year in 4th position was his best finish to date. Hailing all the way from Alaska is a serious commitment of time, energy and money. What draws Jeff to Wyoming is not only the opportunity to run dogs in beautiful country, it is also the people, be it the organization or fellow mushers. Jeff said : “ The Stage Stop is like a big family everybody traveling together for more than a week and going to all the banquets”. Last year Jeff’s handler was in a somber mood at the end of the race and Jeff wondered what was wrong. The answer was very telling: “ I do not want the race to end “. It can not get much better than that.

So it is not surprising that running the Pedigree Stage Stop Race is like a long vacation to Jeff. He leaves his Alaskan home mid January and is gone for at least a month. For the first years he traveled to West Yellowstone to train from there, to get his dogs a bit more accustomed to altitude. His training trails at home are between 400 and 1400 feet, quite a bit lower than the up to 9000 feet they will run during the race. Plus those trails in West Yellowstone are nicely groomed Snowmachine trails. Those are a bit harder to find in Alaska. Last year Jeff trained out of a lodge in Pinedale, near the race site. 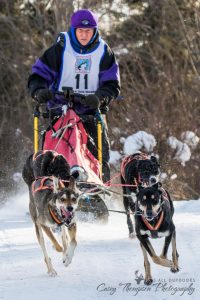 Speaking about training. Training is in full swing and has been for many months. Jeff is aiming to train every other day, currently doing 30 to 35 mile runs, always timed with his GPS. Snow conditions have been good in Fairbanks. “ I am a snow surfer “. Oh yes, most mushers are, following that white stuff. In Jeff’s case that meant early season training runs took him to the beautiful ( and hilly ) White Mountain Trail system.  The Stage Stop will be his first race of the season. After the Stage stop he might head to “ The Pas “ is Manitoba or the Fur Rondy, it all depends on the snow.

Dogs. The best part of mushing. Jeff started with training 30 dogs in the fall and now 21 are still in his race pool. When the day comes to hit the road, he is going to travel with 20 dogs. His dog truck can hold 20, single boxed. That gives him 6 spare dogs for the race, which starts with a pool of 14 dogs. When we talked about driving with dogs, it was interesting to hear, that Jeff preferred to have dogs doubled up in the box for comfort and warmth while driving the long distances. Then once arriving at the race, they will be single boxed again. Yup, more than once, did I have 2 dogs jump in one box while trucking myself, specially litter mates. Jeff prefers leash walking over loose dropping while traveling. Both sure have pro’s and con’s. One pro of leash walking is you should always end up with the same number of dogs back in the box. Certain ones of mine, would specially at home, disappear to the feed shed, when I tried giving them the freedom of finding their own way to the truck. About a quarter of Jeffs dogs have not been to Wyoming before. Having 75% veterans makes for a nice and seasoned team. The team is aged 2 to 6. Quite a few leaders in the team, be it litter mates Coco, Cinnamon and Cider. Or 3 veterans named Gil, Nola and Tommy. In total he has a few more males than females in the team. 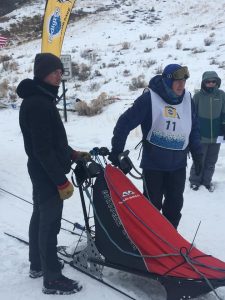 One thing I wondered about when to decide, of which dogs to leave off. A 14 dog pool, where only 10 dogs can be run each heat, means 4 have to sit it out. Tough Choice. They all love to run. I will likely get into that subject in another post, after talking to a few more mushers.

When Jeff first came to Wyoming, it had had been a bucket list thing: “ I was kind of on the edge of retiring”. Now coming to Wyoming is more more than that! His favorite stage is Pinedale “ because there is lots of fast stuff and one big hill “. Looking forward to catch up with Jeff in Jackson in person, safe travels. Put on the sunglasses in Calgary…. Jeff wants to thank his understanding and supportive wife Sarah, as all this would not be possible without her!