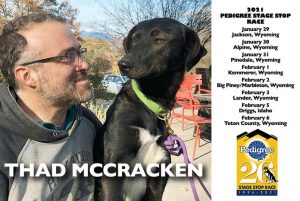 I caught up with Thad McCracken while he was training in West Yellowstone. Thad had left his home in Mosier Oregon early, to get some quality miles on snow in, before the big race. When asking him if he was exited to be running in the Pedigree Stage Stop Race, he mentioned that at this time, it was less excitement and more being nervous. I am sure that is going to change quickly once he arrives in Jackson and realizes how well run and fun this event is. 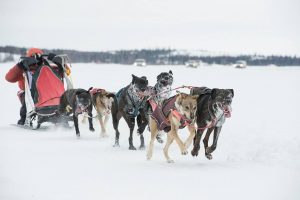 Thad is not entirely new to the Stage Stop, as he has run the 8 dog class twice; of which he won one year. That also means he already has run the trails of the Alpine and Driggs stages. Being on the road with his dogs is also nothing new. Last winter they trecked together to Alaska. I remember seeing Thad here in Whitehorse where he ran the Babe Southwick Memorial Sprint Race on the Aurora dog track. From there he continued to run the prestigious Fur Rondy. The original plan was to run the ONAC after that, but the race got cancelled and instead of racing dogs, he had to race back across to border through Canada, before it got closed.

This is also one of the reasons Thad has decided to give the the Pedigree Stage Stop Race a go this year, with there still being uncertainty of border crossing through Canada en route to Alaska . Same as some of the other Mushers I have spoken to, Thad is very appreciative of the Stage Stop Race crew to actually pulling off the 2021 race, and that alone is a good reason to sign up and run it. He put it well: ” Focus on what I can do, instead of what I can not do and embrace it. ” 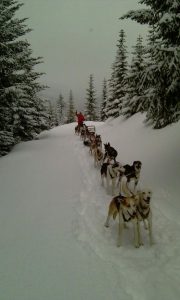 Thad´s Kennel Name is Mosier Misfits, named after the town he lives in and the fact that is dogs were a motley collection at the beginning: With some rescue dogs, some dogs bought from Doug Swingley and some borrowed dogs. Sounds familiar to how I started back in the day. About 14 years ago Thad also helped train dogs for Dave Turner, who has moved to Alaska since.

Work life has not been much different for Thad this season, as an software engineer he has worked from home for the last 15 years. Not quite the same can be said for ” dog training life “. This season started throwing curve balls early on. Thad can not really train from home, other than 2 mile puppy runs. To train on dirt he has to drive 10 miles from home, to have trail access. Once he want to get on snow, that drive gets even longer with 50 miles. That is some serious commitment.

Of course the dogs have gotten into a good travel routine that way: ” Where I park and get them out I see very few people. I can loose drop, put on harnesses and hook them up. They never see a drop chain. It took some initial effort to do that, but once the core group of dogs knows it, it is an investment of time which paid off 100 times. And it is so much more fun when the dogs are loose dropped “. 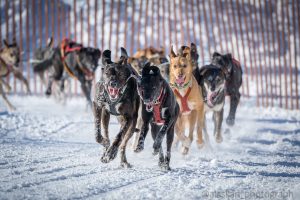 The first curve ball came in the fall. September was way too warm and dusty to train. It had been an exceptional hot summer; even forest fires affecting his training trails. By October 1st conditions had not improved much and training start had to be pushed back to mid October.

Then usually by mid December the snow runs begin. That was also a no go. Because of either no snow, or having intermittent spurts of ice for a week at a time. ” My whole season has been an exercise in patience. Sometimes the best training run is the one you do not do, if the conditions are not right “.

In total Thad started training with 17 dogs of which he now has 14 dogs on the truck when is left home and headed for West Yellowstone, to finally get on good snowy trails. On the upside, his team has no young dogs in it. 10 of the 14 are 3 year old littermates: ” My wife wanted to do one litter, for the experience of raising them. Likely the only litter we ever breed. It turned out to be 11 dogs”. All 11 ran Rondy last year. Mom is dog named FLOW from Jeff King who is now 9 years old and still in the team. She is an exceptional dog. Dad is Wyatt  ( 7 ) from the Streeper and with Gunnar and Pepper ( both 5 ) 2 more Streeper dogs round out the team. A total of 8 females and 6 males. 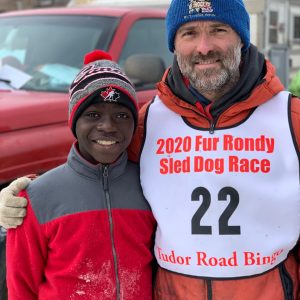 Feeding and traveling with dogs is sure a workout: ” I water in the morning with baited meat water about 2 hrs bevor the run. When I get back I like to immediately feed them some kibble or a hardboiled egg. The main meal is about 4 or 5 in the afternoon “.  Caribou Creek Cold is the kibble of choice for Thad, plus chicken and beef with some supplements added.

As for Thad`s goal in the Pedigree Stage Stop Race: ” To be honest, there were several times I thought about withdrawing. But I decided to put one foot in front of each other to see if we can still make it. I plan to treat the 1st half of the race as training. I can only race with what I have. The plan is to be conservative in the 1st half of the race and if they are getting stronger, then maybe I can pick a couple of Stages to race. ” Thad is looking forward to sharing the trail with his competitors and is looking forward to learn from the legendary Veterinary crew!