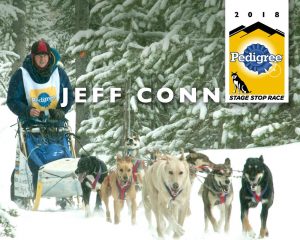 Jeff hails from Ester Alaska,traveling the farthest of any musher this year about 2,800 miles from Jackson Wyoming.

He breaks the trip up by stopping and training at friend and fellow mushers Terry Streeper and Don Cousins before making his way to West Yellowstone Montana then on to Dubois Wyoming for 11 days of acclimation. He’ll be doing some cross country skiing to help himself with his own acclimation.

Jeff starts his training in early June with an exercise wheel compiling 640 miles on the wheel. His runs in harness start in late August and continues with wheel runs for distance conditioning.
Aiming for 40 miles runs by Mid December. Doing his last long run of 52 miles three weeks before the race starts.

After arriving in West Yellowstone Jeff starts with 10 mile runs then builds up to 26-28 mile runs backing off again the week before the race. Jeff says he’s shooting for a total of 900 to 1,000 miles by race day.

You won’t meet another musher who’s as kind,knowledgeable and hard working as Jeff. A true force on the trail. He’s always right there ready for competition every year at the Pedigree Stage Stop.
He may not be as flashy as some but NEVER underestimate Jeff Conn.