Hello Pedigree Race fans. Day 2 in Pinedale is a wrap. The Stage Stop family since has traveled to Kemmer and enjoyed a great welcome dinner there. What a nice drive down that was today!

Anny Malo is still wearing the Yellow Bib. Matter of fact she has widened her lead today to 4 minutes. Out on the trail, that at first looked different: At mile 11, Lina had made 2 minutes on Anny, at the halfway point Lina had almost caught up to Anny. 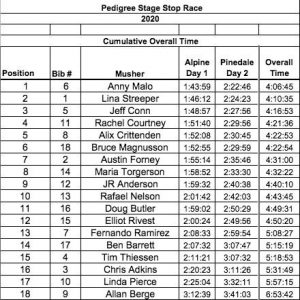 Then on the way home the picture changed and Lina started falling back. In total she lost 5 minutes on the return leg, which in the end gave Anny another 2 minutes lead.

Jeff Conn from Alaska has been running a very steady race. And running he is. Himself! I first hand saw him sprinting up some pretty big hills behind his team. Very impressive. He is 6 minutes behind Lina Streeper and 10 Minutes behind Anny Malo. 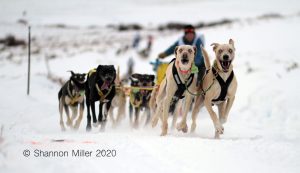 Another team with very steady runs ( also when looking at the split times ) is current 4th Place Musher Rachel Courtney. He team looked very solid out on the trail.

5th Place is far from decided. Alix Crittenden and Bruce Magnusson are duking it out. Right now, after 2 days of racing, they are separated by 1 second. Noticeable on the last quarter of todays run ( from Mile 26 to the finish ) Alix posted the second fastest split time behind Maria Torgerson. A strong finishing team, means there is lot’s of gas left in the tank. 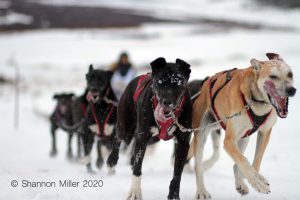 I bet you anything that Austin Forney, currently running in 7th position will have to look over his shoulder tomorrow with Maria Torgerson breathing down his neck. Maria is running a very experienced Streeper team.

JR Anderson and Raphael Nelson are rounding out the Top 10. Both put in a solid performance on todays second stage and came in with all 10 dogs they started with looking very nice. 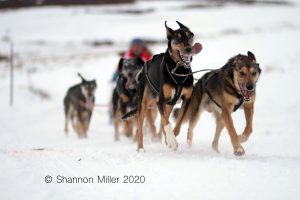 Both of the first stages have seen nice weather. If anything a bit on the warm side. Both times the trail was hard and fast on the way out, but then softer on the returning leg. Hardly any wind to speak of, todays Pinedale leg had a slight 5 to 10 mph headwind on the return leg. Enough to cool the dogs down, but not enough to blow any snow around. If we are to believe the forecast for Kemmer for tomorrow, that could very well change. Not only is there snow ( potentially 4 inches ) in the forecast, they are also calling for wind. And that could be a factor in this wide, open country.