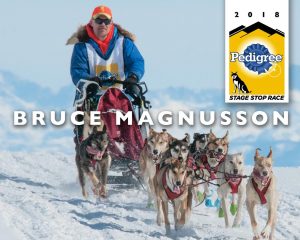 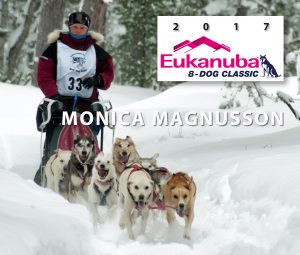 The team of Bruce and Monica Magnusson are no strangers to the Pedigree Stage Stop by having the most consecutive returns by any team ever to race the event.

Bruce finished 3rd last year in the main event while Monica finished second in the Eukanuba Classic missing first place by only 1 second.
They left Michigan with a trailer full of dogs,sleds,gear three people and the usual assortment of necessities. 1,598 miles later arriving in West Yellowstone Montana to acclimate the dogs and mushers at least a week before game time as they have done for the past 6 seasons.

While training for them started a bit later this year and continued spotty due to the unusually warm temperatures, they got good snow in early December and were on sleds by December 10th. As usual for that part of the country when the snow starts it doesn’t turn off making things difficult but in a good way. By the time they received 75 inches they stopped counting. So the dogs definitely have their snow legs and are looking forward to the hard and fast training trails in West Yellowstone. This year they have more miles than usual but fewer hook ups.

Due to the warm weather forcing them to make bigger jumps in mileage. Sometimes it’s the unexpected tweaks in training that pays off in an 8 day race.No matter how many years we do this we are always learning.