Coming back to Rachel participating, a monkey threw a wrench in things. Rachel was born with congenitalachromatopsia, an uncorrectable visual disorder. Her vision is 20/200, and she is totally color blind. That seemed to have not slowed her down from running dogs. But she does need a visual interpreter on the trail. 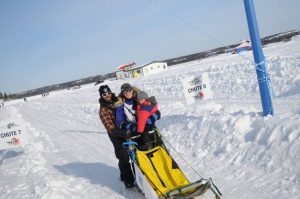 Rachel and I both were Rookies in the 2005 Iditarod Sled Dog Race from Anchorage to Nome. Her visual interpreter on that run was Tim Osmar. She ended up scratching that year, to then finishing 57th in Nome a year later in 2006. Tim traveled the trail by dogteam on Iditarod. For the Pedigree® Stage Stop Race they had planned to use Snowmachine support. Unfortunately their snowgo driver got hurt and can no longer go.

That meant it was time to derive a Plan B, to find another driver. Jerry, her dad, has run the race many times. But after 2 knee replacements and a compound fracture in the last 16 months he strongly did not feel up for the task. Not as tough as he used to be I guess…., just kidding….. Jerry. He ran the last time in 2018 with 71 years of age, which is quite an accomplishment: 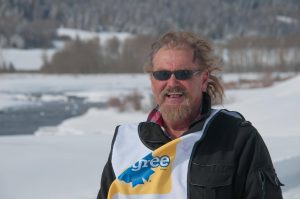 ” There were 2 other people Rachel would trust the dogs with, one being Patrick Beal ( Iditarod Finisher 2016 running Mitch Seavey dogs ) and Aaron Caldwell.”  Aaron has worked for Oregon Dream of Trails in the past, knows the kennel and dogs. In the summer Aaron works on the Mendenhall Glacier for Alaska Icefield Expeditions giving dog tours. When they approached Aaron his immediate reaction was ” Are you shittin’ me “. ( my thought when Jerry mentioned that was: darn…. why did they not call me…. ). Aaron Caldwell is fit. Very fit. “His driveway is a mile and a half long and has 1000 feet in elevation. He runs it twice a day back and forth in steel toed boots just to get to work” ( that could explain why Jerry never called me ) 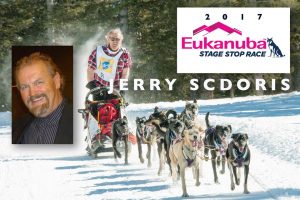 Aaron lives in northern Washington and will come down to Oregon on the 24th to run the team for 3 to 4 days before heading to Wyoming on the 29th. At least that is the game plan for now. Their kennel used to be comprised of ” Good old fashioned ” Gareth Wright Lines and Swingley Lines. A few years ago Jerry said they realized they needed to change things as the race is getting shorter and faster. They bought a female named “Tanis ” from the Streepers in Fort Nelson and bred her to a male named “Bolt”.  Out of that breeding they got a huge littler of 11 Puppies. 10 of them ran on the team 2 years ago as 15 month olds. Frost, Tolstoi and Jane are the main leaders. As Jerry put it: “Life has changed with driving these incredible dogs”.

They plan to take 15 dogs ( one spare dog ) on the road trip. Training has not been ideal in Oregon this winter: ” It sucks, we have just enough snow for rides, but not enough to run a big string of race dogs ” Jerry said. They are still training a pool of 20 dogs on the ATV at 13 to 14 mph, every other day. They also use a ” Hot Walker “, which is basically a giant training wheel, where the dogs can loose run. Another Musher I know using one of these is Sprint Mushing Champion Michael Tetzner from Germany. Have a look at this video: