Hello Pedigree® Stage Stop Race Race fans. The next musher I caught up with is Grant Beck , a fellow Canadian, all the way from Yellowknife. 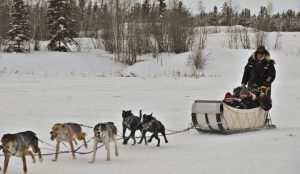 That brings back some memories. Back in the spring of 1997, having survived my 1st real winter in Canada I drove from Ontario to Yellowknife is search of a new adventure. That is where I met Grant and also his brother Arthur from Hay River. Grant was running an impressive tour operation at that time already. Mainly catering to folks from Asia, coming for Northern Lights viewing. At the time Yellowknife somewhat had a monopoly on that type of tours. Now 2 decades later Northern Lights tours are booming in Alaska and the Yukon too. 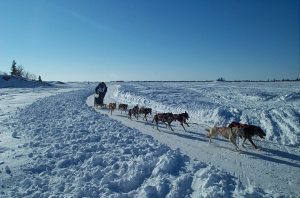 Grant, always an innovator, has gone with the time. He has seen a lot of changes over his life time mushing career. And the latest change was a complete makeover of his entire kennel, doing away with a tether setup and putting all dogs in pens. Now that is a huge undertaking for anybody, let alone someone like Grant, who has a couple of hundred dogs. It is one thing to bring in the man power and finances to tackle such a huge project, it is another to also completely ” re-train ” the dogs, as they are creatures of habit. 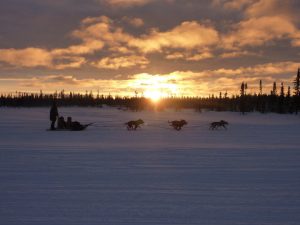 This whole tether versus pen subject could fill pages, even a book. Having tried both myself, I preferred tethers with lots of loose dog play time ( and dog on the couch time ). I always had a real dislike to first needing to open a pen, before I could pet and interact with my dogs. I also felt that less dominant dogs did not fare as well in pens, as on chains, as they were easily bullied by the dominant ones. Yet, society in changing and depending on what market a tour business is catering to, a pen setup might be the better option. Kudos to Grant for giving this a try.

One thing Grant was quick to point out, how much harness breaking puppies had changed. A young dog, which had never anything attached to their neck, could easily get freaked out, when first hooked up. He solved that problem by attaching a ” puppy trainer dog ” to the young dog via neckline for a while, before actually hooking the pup up to the ganglion. 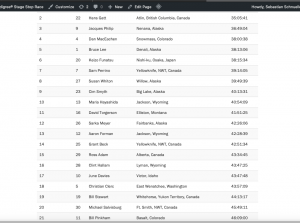 Grant has a long history with the Pedigree® Stage Stop Race. His name can be found in the archives all the way back in 1999. He was not alone doing the long treck from the North that year. Fellow NWTerrirory Mushers Michael Salvisberg and Sam Perrino were also entered. And as things go, over a long period of time, Grand says he can not even remember how many total times he entered. ( 6 or 7?) He loves to come back. As he puts it, the Stage Stop used to be a bit of everything from Iditarod to Mid Distance to Sprint. At least that is how it used to be. These days it is definitely closer to Sprint and has moved away from catering to Iditarod Mushers. 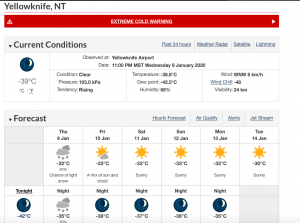 One thing about living in Yellowknife are the temperatures. While cold and snow comes early, giving a real advantage in training in the fall season, winter can be brutal. Specially now in January. And this year looks like to be one of those. Snow has been great in Yellowknife, freezup was also nice, but now the cold has a firm grip on the town on the north shore of Great Slave Lake. That makes training difficult. Giving rides is great conditioning for the dogs. Yet it is now quite the race training Grant is hoping for. He has done lots of runs up to 20 and 25 Miles, but has not been able to up the distance further, because of the cold. Running a distance team at 8mph at 40 below is one thing. That is uncomfortable. But running at 16 to 18 miles an hour at those temperatures is another whole different animal. Frostbite becomes a real issue from the ” running ” windchill alone. So it is not surprising to hear, that Grant is not entirely sure, if he is actually going to make it to Wyoming. I sure hope he does. It would be good to catch up in person. The last time Grant and I visited was many years ago at my kennel in Whitehorse. 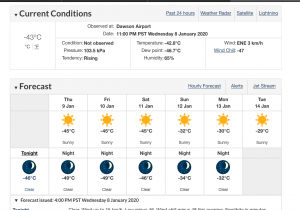 Grant is using Inukshuk 32/32 dogfood, supplemented by lots of meat ( chicken or ground beef ). Availability is an issue up north. Both has to be trucked in for a long ways from either New Brunswick or Winnipeg. He has 40 race dogs of which he is focusing on 24 for the Stage Stop. Their ages range from 3 to 8 and they are about 50:50 male, female. ” But pretty much all my tour dogs could race ” Grant pointed out. He has always been known for very high caliber dogs. Safe travels, I hope the cold snap breaks in time for Grant to hit the road. I could not help it, to throw in this forecast from Dawson City in the Yukon. Dang, that is cold…. very darn cold…….