Hello Pedigree® Stage Stop Race Fans. I am still trying to catch up with 5 more of the mushers signed up for this years race, some of them could already be on the road. Time is drawing closer for the race to begin. That means it is travel time for some of the teams, hailing from as far away as Alaska or British Columbia. For yet others, it is decision making time, if it is feasible to run the race at all. 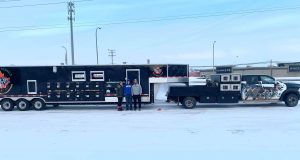 Streeper rig, quite the setup!

Unfortunately the recent cold snap which has gripped the North has seen Grant Beck announce that is he is no longer going to make it. Training miles which are lost, at crucial training time can not be made up short before the race. Hopefully the rest of Grant’s racing season will be warmer and go smoother.

Another team which has had its fair share of bad luck is the Scdoris Family from Oregon. Mushers are pretty good at deriving a plan B, sometimes C. Well, in their case they are needing to use a few more letters of the alphabet. I best let Jerry describe it in his own words: 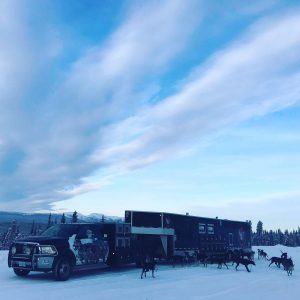 The Streepers on the road, loose dropping their dogs

Hello Friends. At the 2018 running of the Stage Stop my old knees were pretty much completely worn out.  When I crashed at Lander I had only one goal and that was to finish the race.  I spent 2019 getting two total knee replacements and worked my butt off in rehab after the first one to get ready for the second one.  A month before the second surgery I felt great and decided to run our little race here in Bend, the 70th running of the race.  I crashed and broke my tibia.  I rehabbed for about 6 weeks and had my second knee surgery.  I worked really hard rehabbing but nothing was going right so we asked if Rachael could replace me as driver of our dogs with all the extra requirements she needed to run safely.  You said YES!  For which we were so grateful.  We acquired a snowmobile, trailer and truck and competent guide.  We set about with the dogs to make the training changes Rachael requires with the dogs to be successful.  The person from Scenic Safari there in Jackson who had volunteered to be the snowmobile guide had an accident and broke her ankle and they don’t have anyone else volunteer and we couldn’t find anyone else to take her place, huge disappointment.  We asked if we can change the driver again to a competent replacement.  Again you graciously consented.  We replaced Rachael with Aaron who over the past ten years has become almost like a family member  and he is delighted at the opportunity.  I continue to train the dogs and yesterday on our fast trail I did our final longer run, 37.1 miles and averaged 13.9 mph.  Happy and content and optimistic I went in the house to call Aaron and report the good news.  There was a message on my phone from Aaron.  I was blown away by the content of the message.   Aaron had slid off the road on his driveway up in Northern Washington Cascades and hit a tree, minor accident, but he broke his hand.   Six to eight weeks in a cast.  So here we go again.  With your permission we have a few very competent dog people we are going to ask to run our dogs.  We are disappointed but we are not desperate, first we considered me and in the same breath said “no way”.  Then back to our original list of present and former guides we trust completely.

Things seem to go a little smoother for the Steeper family who has left Fort Nelson. Look at this video of their beautiful team at Don and Faye Cousins place in Alberta.