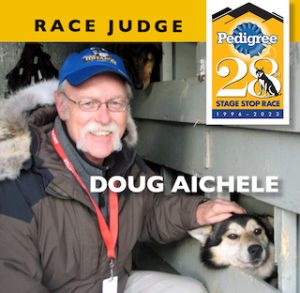 Volunteers are the backbone of this ( and other ) race. It takes a lot of dedicated people to ensure that the event is running smooth. One of those people is DOUG AICHELE — RACE JUDGE. Below is what Doug has to say, of why he likes to be part of the Pedigree Stage Stop Race.

Doug lives in Stillwater, Oklahoma, where he maintains a small ranch and dog kennel. He is a retired mathematics professor at Oklahoma State University (OSU) where he taught for many years. Currently, his retired racing sled dogs in Stillwater are Vulcan, Vixen and Rico. Gumbie is the father of Vulcan and Vixen; he is an Iditarod and Yukon Quest veteran (2010 Pin and Patch Dog). Doug has handled sled dogs for Warren and Kate Palfrey’s Northern Star Kennels at the Iditarod, Canadian Challenge, and Pedigree Stage Stop Race. He has served as a Pedigree Stage Stop Race Judge since 2015. Doug is an Army (ROTC) veteran and climbed or guided more than 40 of Colorado’s Fourteeners.