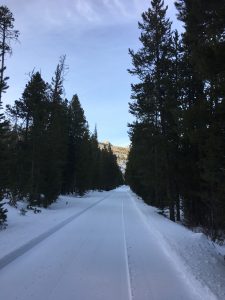 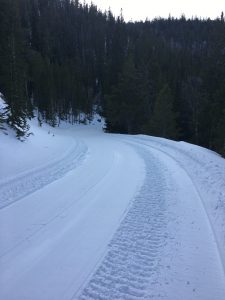 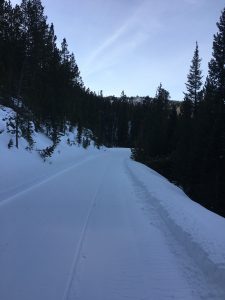 Above and right:  Conditions are looking good this week along the Loop Road between Lander and Louis Lake!  Photos by Jerry Bath

Update for race fans and mushers coming to the 24th annual Pedigree Stage Stop Race this coming January 25 through February 2:

I was out doing some trail scouting the other day above Lander and ran into the Wyoming State Trails groomer. We chatted for a bit and we agreed we have trails that we usually don’t see until the end of February — not because of snow depth, we are actually a little behind on that note.  But the early storms’ snow deposits stayed and stuck, and lack of wind (or the right wind) at the right time contributes to conditions.  Also we have not seen as much “Bahama” weather this 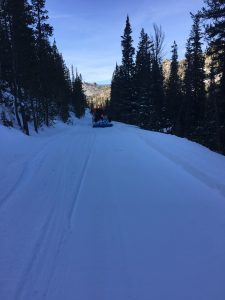 year up at the higher elevations that we so often see even at 10,000 ft. — it’s not unusual for it to be 20 degrees warmer at elevation than the valley floor on one of the many bluebird days here above Lander. All of this means trails are hard and fast!

Groomers usually do the lion’s share of their work at night as the warm days tend to make the snow stick to the drag.  Also that gives it enough time in the wee hours of the mornings when it’s coolest to set up and re-freeze.

We have quite a few mountain lakes and any day of the week you will see both parking lots with snow machines headed up to do some ice fishing. This year, like most, the fishing is fantastic.

Back to dog sledding — so far so good.  Barring a decision from Mother Nature to change our plans at the last minute as we have done before — all is well in Fremont County!