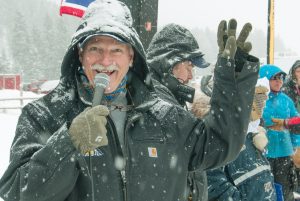 Returning for his second year as 2019 Race Commentator, Jerry has been with the Stage Stop since its beginning — first as a spectator helping the Lander trail crew for the very first Stage Stop 24 years ago; after acquiring a few dogs and some training, he entered the IPSSSDR in 2009 and raced it every year through 2017; and as a Lander Chairperson with his wife Sandy for the past 19 years.

Can you describe a typical race day on the trail?  A typical day on the Pedigree Stage Stop Race starts early, about 5 a.m., by dropping the dogs (a term used to let the dogs out of their boxes on the truck) to let them stretch and relieve themselves. Then mushers look over each dog by either letting them run loose or taking them for leash walks. This is followed by a light but hearty breakfast of a meat broth, emphasizing lots of water for the upcoming day so as not to get the dogs dehydrated.

After the dogs are checked out you make the lineup for the day, considering the trail and weather conditions — always thinking a day or two ahead in a multi-day stage race where you can run 10 dogs a day maximum but have 14 total on the truck to pick from.

Most courses are an out-and-back so the trucks can stay put until the team returns. Once back at the start/finish line you make notes about the day’s run, what the dogs did and didn’t do, and let the dogs cool off, giving them water and an electrolyte frozen snack. Then attend to all their feet applying salve as needed and giving quick rubdowns to any you feel are a bit stiff.

Then off you go to the next town or stage. Feed them dinner, always noticing their appetite and attitude. Go to the town function (usually a banquet), drop the dogs again, and head back to the hotel or host family’s accomodations.  You tend to sled repair,waxing of runners, equipment adjustments, etc. for the next day.  Around 10 p.m., drop the dogs one last time before hitting the hay.

How often are the dogs vet checked?  What happens if a dog becomes ill or injured during the race?  The dogs go through a rigorous vet check before the start.  Then are monitored by the owners continually and the watchful eyes of the vet crew and officials before and after each stage.  All dogs are micochipped before the start and randomly checked (scanned) by the vet crew at the start of each day.  Random urine samples are also taken in the mornings to assure no illegal drugs have been used, even if unintentionally.

If a dog becomes ill during the race the musher bags the dog (puts it in the mandatory sled bag) and the dog will get a ride to the finish, where the vet crew will give it attention.  Any dog that is thought questionable by the vet team will have to be approved by them daily or dropped from the race schedule. These dogs will be marked out by using a permanent marker on the dog, as any other dogs on the truck that are not part of the pre-race specified 14 per team.

What do the dogs eat, and how much?  The dogs eat a high protein/fat kibble usually soaked in water and generous portions of either fish, beef, chicken, or organ meat depending on the individual dog’s caloric needs.

How do officials watch out for cheating during each stage?  Well, the trails are well marked and manned at pre-specified locations to check each musher’s bib number as they go by.  Everyone must run the same entire course.

What advice do you have for someone who may want to get into mushing for the first time?  Make sure you have adequate facilities, money, and time.  These dogs require 365 days of attention all year long.  Unexpected vet bills can be expensive and you have to plan for the dogs into retirement.  It’s a lifestyle commitment.

Go visit a few kennels, tour operations, and go to some races. Decide what’s for you. Perhaps offer your assistance as a helper or handler.  Be an armchair musher by following web sites of races and/or local mushing clubs.

Most of all get involved, volunteer!  You’ll find out if it’s for you by getting your feet wet.